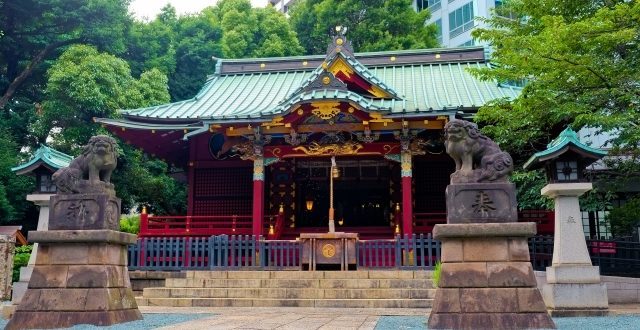 How to enjoy “Konno Hachimangu Shrine”

Speaking of Shibuya, it is famous as a town where you can enjoy shopping and culture in the office district.But it’s not just that.In fact, there are many shrines in Shibuya, and it is famous as a power spot.This time, I have featured the famous “Konno Hachimangu Shrine.”!

It is a healing spot where you can enjoy a quiet atmosphere even though it is in the hustle and bustle of the city.In this article, I summarized the history and highlights of such “Konno Hachimangu Shrine.”.Please take a quick look until the end.

The history of Konno Hachimangu Shrine

As he followed MINAMOTO no Yoshiie and raised military exploits in the Gosannen war, he received Take Kuratani no Morisho 7 visits (Shibuya, Yoyogi, Akasaka, Ikura, Azabu, Hitotsugi, Imai and so on).On the other hand, thanks to the Hachiman deity that he possessed, he was grateful, and he transferred Hachiman-gu to this place.

At that time, there was’ Shibuya Castle’ built around this Hachimangu Shrine.It was built for the protection of this castle, so it was called’ Shibuya Hachiman-gu Shrine’ at that time.This “Shibuya Castle” is said to be the origin of the name of the present “Shibuya.”.

After that, Shigeie, the son of Motoie, was not blessed with the treasure, so he prayed for the succession to Hachiman-gu Shrine.This led to the birth of a boy called’ Kinomaru.’.This’ Kinomaru’ became a brave samurai later, and it is now called’ Konno Hachimangu Shrine’ because of its great military prowess.

The general public can participate in the event.The time of the festival is from 9 to 9 30, and if you attend the festival, it will be gathered at the office by 8 50.Why don’t you try to join us with the gratitude of the gods everyday?

In addition, in the Konno Hachimangu Shrine Annual festival, the biggest festival in the annual festival, it is possible to participate as a bearer of portable shrines.Every year, many people take part in the festival, regardless of their nationality or region.For the participation method, please check with the official site of the regular grand festival.

The official site for the Konno Hachimangu Shrine of the Shibuya

It will be used as a place to announce new issues with the times, and people who do not answer the questions, or those who dedicate the answers and new problems will appear.

The “Arithmetic Ema” in Konno Hachimangu Shrine was also appeared in the film “Tenmei,” and played an important role as an opportunity for Shunkai Shibukawa, the main character, to learn about the Japanese mathematician, Seki no 考和.

There are about 1,000 “arithmetic Ema” in the whole country, and 3 Ema in Konno Hachimangu Shrine are still preserved.These were donated about 150 years ago, and the problem was dyed with beautiful colors.You can visit if you want, so why don’t you visit one of them?

In the precincts of the shrine’s premises, “Kin King cherry” (Gold), designated as a monument designated by the Shibuya ward, is planted.This cherry tree is a type of Nagushu scarlet cherry tree, and it is a very rare cherry tree with a mixture of Yaei and Hitomono due to the mixing of the petals of the petals.

As a legend, it is said that MINAMOTO no Yoritomo was grateful for the loyalty of Konomaru, who served as the commander of the war, and to leave his name in the later generations, he was told to have been transplanted from Kamakura to this place.In the Edo period, it was counted as the’ Uemon cherry tree’ in Ensho Temple (Kitashinjuku, Shinjuku-ku) and’ Hatamoto-zakura’ in Hakusan-jinja Shrine (Hakusan, Bunkyo Ward) in Edo 3 people, and it has been protected and raised up to the date.

The annual event “Kino Cherry Blossom Festival” will be held on the last Saturday of every year.

where you can feel the architecture in the early Edo period.
The “Gosha” was built in 1612 (Keicho 17).

At that time, there was a rumor that the third shogun was Tadanaga, the younger brother of Iemitsu.Therefore, he was deeply concerned about his mother’s wet nurse, Kasuga no Tsubone and Aoyama Tadatoshi who was an instructor of education, and earnestly prayed to’ Konno Hachimangu Shrine’, which was worshipped as a guardian deity, and Kasuga no Tsubone offered 80 ryo of gold as a protection fee.

Until now, it has been repaired several times, but it has been designated as a tangible cultural property designated by Shibuya Ward as one of the valuable buildings left the architectural style in the early Edo period.The shrine is a Gongen-zukuri, and it looks gorgeous and light.The tiger and 貘 carved on the right and left sides of the characteristic hall of worship are said to have the right politics and the peace of the world.

The remains of the fort of the Shibuya castle

There was a castle called’ Shibuya Castle’ on a hill centered on the place where there is now’ Konno Hachimangu Shrine.’.This castle is a castle built by Motoie Kawazaki, the founder of the Shibuya clan.

Currently, it is only a stone of a fortress, and it is only left in the precinct.This stone is a part of the stone wall of’ Shibuya Castle’ and it is valuable to indicate that there was a castle until the present day.It is also famous as a power spot, so please take a look at it when you visit.You may get a mysterious power of stones that have survived since the Heian period.

In Hachiman-gu, there is “Ontake Shrine (Mitake).”.This shrine has a Musashi Mitake-jinja Shrine located at Mount Mitake as its head office.It is a shrine that gathers the faith of people who engage in business activities as the god of “Kaizen” and “Prosperous Business.”.

In addition, since it was the residence of the high praise of the samurai, Takeru Yamato no Mikoto has been enshrined the belief of samurai as a god of martial arts since ancient times.

It is said that a pair of guardian dogs and a torii of Nishisando were relocated to the’ Kasetsu jinja’ which was located in front of the pre-war women’s academy.

In Hachimangu, there is a “Tamatsukuri Inari Shrine.”.It is a shrine built in the middle of Edo period in 1703 (Genroku 16 years old).

From the beginning of the construction to the Meiji period, rice cultivation had been carried out in Shibuya.Also, as commerce was popular, the god of “harvest of gonuts” and “prosperity of business” was worshipped, and the faith of the local people was collected.It is still a popular place as a power spot for gold luck.

Do you know a person called “Kinomaru?”?He is said to have been the origin of the “Konno Hachimangu Shrine.”.

“Kinomaru” followed Yoshitomo, who was the father of MINAMOTO no Yoritomo, and he was active during the Hogen war, and he was given his name.According to various theories, he shaved his hair to pray for the spirit of Yoshitomo who died in the battle, and prayed for the spirit as Tosa no Masatoshi in Tosa no bo.

It is said that he was deeply acquainted with Yoritomo and Yoshitsune, and he was said to have brought together each other every time they clashed with him.However, after the Battle of Dannoura, Yoshitsune was ordered to kill Yoshitsune by Yoritomo, so he entered the residence of Yoshitsune’s house after he was worried about him.As a result, he was killed by Yoshitsune, but it is said that he was a splendid last lady who was a brave commander.

“Kinomaru” appears in Heiji Monogatari and Chikamatsu play from its heroic prowess.Also, the Tale of Masatoshi Tosa appeared in the Tale of the Heike, the Azuma Kagami and the Genpei Seisui Ki (the Rise and Fall of the Minamoto clan).In addition, he was a popular player in the Edo period, even in Kabuki and Joruri (traditional Japanese puppet theater).He praised his fame and changed his name from’ Shibuya Hachiman-gu’ to’ Konno Hachimangu Shrine.’.

At present, Kinomaru’s wooden wood is stored in Konomaru Mieido in the temple precinct.This wooden statue is said to have been left by his mother as a guardian when he was 17 years old.The wooden statue is specially opened at the Kinomaru festival, which is held on the last Saturday of March every year.Please take a look.

There are 3 blessings in Konno Hachimangu Shrine.

The first is “traffic safety.”.In front of Hachimangu, there are 2 paths :’ Hachiman Dori’ (Old Kamakura-Kaido Road) and’ Aoyama Dori’ (old Daisen road).These have been used as traffic essentials since the past, and have contributed greatly to the development of Shibuya.The benefit of the Hachiman-gu Shrine, which is protecting such important points, can be expected greatly.

The second is the “child grant.”.When Shigeie SHIBUYA was not blessed with the treasure, he was given a long-awaited son, “Kinomaru,” as a long-awaited boy because he was praying for a marriage with her husband and wife.After that, it is possible to fully believe in the benefit of “Kinomaru,” and to fully believe in the blessings of the “children.”.

The last is “promotion.”.The reason why this Hachimangu Shrine was built is that Motoie Kawazaki, who was praised for his military exploits in the Gosannen period, thanks to his gratitude for Hachimanshin, who had been worshipped.In addition, I think that the rumor of Kasuga no Tsubone and Aoyama Tadatoshi turned off the rumor of the time, and the rumor that Mitsuie was becoming a shogun could give him a good fortune.

The cute fortune slips are sure to look like Instagram!Please try to pull it out when you visit.

How was it?In this article, I introduced the “Konno Hachimangu Shrine,” which has been watching the land in Shibuya since the Heian period.

As you can see, I think it is a perfect place for the power spot as you can see.In addition, it may be a good idea to visit a shrine with a rich greenery that doesn’t make you feel the hustle and bustle of Shibuya, so you may want to visit the shrine for peace of mind.If you have an opportunity, please try to visit me.