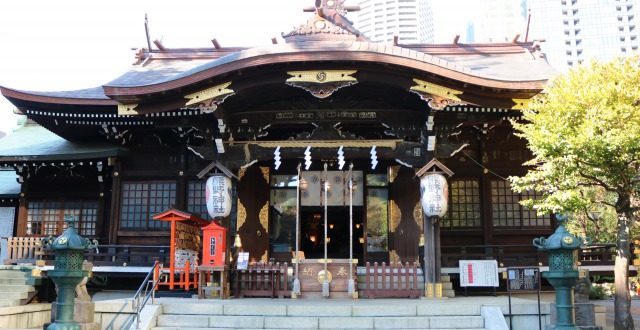 How to enjoy the Kumano Shrine in Shinjuku 12 Companies

Shinjuku is characterized by the large urban Tokyo scenery that is lined up by the office tower.The “Shinjuku Shrine” is located in the center of such a big city, surrounded by green greenery, where you can feel the good history and taste of Japan, “Shinjuku Shrine 12 Shrines.”

This article introduces the history of “Shinjuku Shrine of Shinjuku 12” and other cultural properties as well as the enjoyment of events.

Basic information of the 12 shrines in Shinjuku

I will introduce you to the shrine, the presence of parking lots, and the “Goshujirushi” which is the fire guide of the shrine boom.

It is also known as a famous cherry blossom viewing spot in spring, and you can enjoy the four seasons of Japan.

The history of Kumano-jinja Shrine

It is said that “Shinjuku Shrine in Shinjuku” was founded in the Muromachi period in the Muromachi period, about 600 years ago, from the present Nakano Ward, with the name “Suzuki No. 9”, the name of “Suzuki Choro”, which was transferred from the Kumano Sanzan in Kii Province, which is located in Kii Province, the hometown of the Suzuki clan, by the “Nakano Choja” (the twelfth chief of the Edo period).

In the Edo period, there was a large waterfall on the grounds of the shrine, and there was a pond called a pond of 12 companies nearby, so it was famous for enjoying a natural scenery.There were many restaurants nearby, and it became lively as a Hanacho.

Access to Kumano Shrine and parking lots and the nearest station

Next, I will introduce you to the access method to the “Shinjuku Shrine of Shinjuku 12.”.

[How to access by car] It is possible to pass through the promenade by passing through the shrine Torii along the intersection at the intersection “Kumano-jinja Shrine” in Aohai Kaidomichi, and park it inside the shrine grounds.
[How to access by train] About 5 minutes by bus from JR Shinjuku Station
– The nearest bus stop from Shinjuku West Bus Terminal bus stop :’ Under 12 companies pond’ is the closest.
Approximately 5 minutes walk from Nishi-shinjuku-gochome Station and Tocho-mae Station on the Toei-Oedo Line.

“Goshujirushi” is the most common purpose of people visiting the “Shinjuku Shrine of Shinjuku 12.”.

This is a Goshuinshi that was the trigger of the shrine boom and shrine tour, but there are many worshippers visiting the shrine looking for a seal in the Kumano Shrine in Shinjuku 12 companies.

How to enjoy the 12 shrines in Shinjuku Shrine

As we can enjoy a natural environment in the middle of a large city, what kind of events are there in the Shinjuku 12 Shrines which are popular as a little walk course?

We will introduce them together with the fun way to enjoy the Kumano Shrine’s Kumano Shrine in the twelfth place.

In the “Shinjuku Shrine of Shinjuku 12”, you can see some tangible cultural properties designated by Shinjuku Ward.

At the time of Ema, the 7 kabuki actors who were very popular at the Ichimura-za Theater were depicted by the artist Ichihitsu 齋文, who was an ukiyo-e artist.

It is a votive frame with one of the traditional Japanese performing arts, “Shikino No. 3,” which is incorporated into Kabuki dance and Japanese dance, and it is placed in the main building of Kumano Shrine in Shinjuku 12 companies.

In the Ichimura-za, which is famous in Edo, the kabuki actor’ Hashizaemon’ was offered as a commemoration for the performance of’ Okina’ by the expression number 3.

In the front of the Mizubachi, there is a description of the words in the book written by a famous Kyokka,’ Ota Nampo,’ which was famous during the Edo period.

This is a point that is supported by many people as it is a quiet expression that is surrounded by green trees while the access to the center of Tokyo Nishishinjuku is very good.

It is recommended for those who want to hold a quiet and calm wedding while touching a traditional Japanese culture.

If you have a small child with a little child, you can always visit the shrine.

It is a plan to leave a picture of the state of a family who spends a lot of time in the shrine by a cameraman without having to make a reservation for a studio separately from visiting a studio.

In “Shinjuku Shrine, Kumano shrine,” a large festival, in which the whole Shinjuku is around the whole of Shinjuku once a year, is held in September at the twelfth.

The festival is divided into 3 days, “Yokyu” (night palace), “Taisai shiki” (grand festival ceremony), and “Miya mikoshi togyo carrying miniature shrines” (), and the famous talk show by the famous people is a great success, and it is a great event every year as the portable shrine parades around the streets of Shinjuku.

The Gion Shrine’s Kumano Shrine’s Kumano-jinja Shrine is loved as a place for the entire region, such as the portable shrine, as it is supported by the local Nishishinjuku shopping street, as well as the. 12.

In this way, you can experience the old good traditions, culture and various history of Japan.

As a guardian deity in Shinjuku, many people come to pray for the future, and through various events, the connection between the new people and the people is created.

I found that the Kumano Shrine in Shinjuku 12 branch was not in such a region, and it was a great and sacred place.