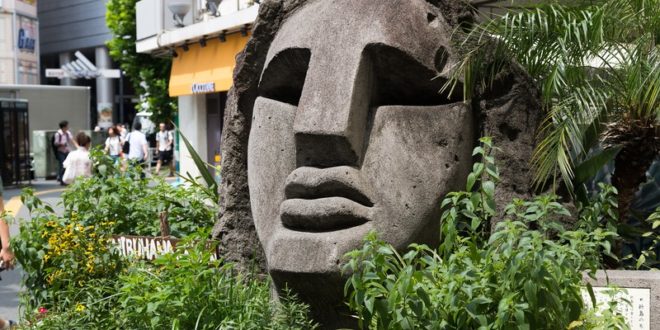 How to enjoy Shibuya Moyai Statue

Shibuya is famous for its popularity in Tokyo and is a busy town in Ryuko Hasshin.It also has good traffic access, there are a lot of transportation, and people walking around are walking.There are many opportunities to meet people, so it would be very convenient if there is a meeting spot.

There is “Shibuya Moai Statue” as an impression spot which is as impressive as the meeting spot of the famous “Hachi-ko” in Shibuya.There are many ways to get there from the Shibuya line, so it’s difficult to find out which route you want to take.

We are introducing an efficient access route to Shibuya Moai Statue from each Shibuya line!

Moai Statue is a stone statue of Niijima’s famous Izu islands, built based on the Moai statue of Easter Island.Because many rare “anti-fire stones (corga stones)” are produced in Niijima, they are easily processed by local artists, so the Moai Statue of the object is built.

It seems that it comes from the meaning of “Boai” rather than “Moai.”.It is true that “Moai” is true, but it has a meaning as Japanese, so it is called “Boai.”.”Hoho” means that the ship is connected with the boat, and the “closest and the best,” and the “closest,” means to help each other, and in the new island, the word is used today.

Moai Statue is built all over Japan, but the most famous one is called “Shibuya Moai Statue.”.It was donated to Shibuya Ward from the island to commemorate the one hundredth anniversary of the transfer of the Tokyo capital to Tokyo in 1980.In addition to Moai Statue, there is a inscription with a inscription describing the meaning of “Boi.”.

The appearance of Shibuya Moai Statue is different from that of the Moabe statue of the model, and it has a design with a face and a perm added with a face.Actually, it looks strange because it looks different depending on the direction you look at it!The bus stop in Shibuya reminds me of a hazy face, and when I look at the coin lockers, it looks like this, and it looks interesting and interesting as it looks like a strange urban legend.

Actually, the Moai Statue that was transported to Niijima was returned to the original place before dawn on December 21.The event that the Shibuya police station and the Nijima Island Tourism Association cooperated and realized seems to have gained popularity and became a topic.I am glad to hear that you do the project like a real event!

Shibuya Moai Statue is the opposite of the statue of Hachiko, the first most famous spot in Shibuya, and it can be said that it is a quiet spot where there are not so many passers-by as it is not an intersection.

Also, the smoking house is adjacent to the smoking place, so it is perfect for the meeting of the person who smokes.Therefore, it may be inappropriate if the family members meet with their children.It may be the best Moai Statue for an adult meeting.

How to get to Shibuya Moai Statue from JR Shibuya Station

You can reach Moai Statue by walking along the right building while looking at Shibuya station.

How to get to Shibuya Moai Statue from Keio Inokashira Line

If you get off the escalator on the first floor, there is a crosswalk in the right oblique direction, so you will cross there.If you walk along the road and walk to the right, you will see the Moai Statue.

If you get out of’ Exit number 8′ at Shibuya station, you’ll get to the famous Hachiko front square.In front of you, you can see Tokyu 100 貨東 Yokomise, so let’s go to the right by the department store.If you walk to the T-road and turn left without crossing the crosswalk, you will see an exotic Moai Statue along the building.

The way from Tokyo Metro Fukutoshin Line and Tokyu Toyoko Line to Shibuya Moai Statue is the same as the way to the Hanzomon Line and the Tokyu Denen-toshi Line.Let’s leave Exit Number 14 from the “1 ticket gate” at Shibuya Hikarie.

Let’s go to the left when we exit the ticket gate.You can see Shibuya station on the JR line, so you can go straight to the station and go straight.When you go to the other side of the station, you walk to the right along the building next time.You will see a Moai Statue with a stone head surrounded by greenery while walking!

How to get from Ginza Line to Shibuya Moai Statue

The way to Shibuya Moai Statue from the Ginza line is that the Tokyo Metro Ginza Line is located on the third floor, so the point is to get off at the first floor.There are 2 exit gates after you get off the Ginza Line, so please take a look at it.

To go to Shibuya Moai Statue, the point is to use the exit of the ticket gate near the car number 3.Let’s use a ticket gate as a guide to a stationery store written as Itoya.After you exit the ticket gate, let’s go down the stairs on the right and get off at the second floor.

And there is a staircase on the left, so you can get off at the first floor.If you get off on the first floor and walk to the right, you’ll see a big Moai Statue face!

Shibuya Moai Statue is a famous spot in Shibuya, but there are anecdotes and fun ways that I didn’t know about it.Also, in Shibuya Station, each line is a different route, which can be said to be a difficult place for people from outside Tokyo to understand.

Therefore, it may be possible to mislead the Hachi-ko statue of Shibuya, which is also a famous meeting place.However, the Shibuya Moai Statue can be said to be an anaugunian spot, which is not crowded with a certain degree of traffic, unlike the statue of Hachiko, which is close to the intersection, and can be met without being crowded with crowds.

I hope you can enjoy the important meeting with me while looking at the artistic expressions of the front and back of the Moai Statue and the back of Shibuya.