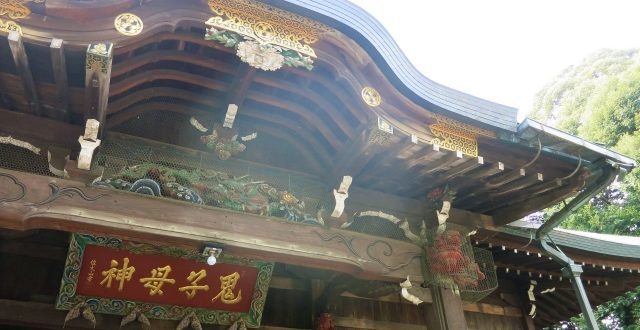 I would like to convey the appeal of Kishimojin-do, which is said to be particularly beneficial.This hall located in Toshima City, Tokyo is a power spot that not only provides children with their children, but also offers the benefits of babysitting.

In the article, we introduce not only the pros and cons, but also the history and the power spots in the precinct, events that we can enjoy with couples and families, and the introduction of spots.Please take a quick look until the end.

Originally, it started when people in the village built a hall in a place called’ Inari no Mori’ in the Azuchi-Momoyama period in 1578 (Tensho 6).The main hall was built in the Edo period in 1664 (Kanbun 4 years old), and it was later expanded to its current scale.By the way, in the Edo period, it was said that in the Edo period, along with the Shingen-ji Temple and the Nakayama Hokekyo-ji Temple, there was a strong faith as the guardian deity of the third Ogona in Edo.

Kishimojin-do has the benefits of giving children, giving birth, and babysitting.Kijin is the god of origin in India.He was a demon called Yayasha, who was born with 1,000 children and eaten as a child.When the people who were troubled by this incident appealed to Shakyamuni, he hid 1 girls from Yasha.As a result, it was said that he became a god who was responsible for the birth of the child and the child, because he knew the sorrow of losing the child and the preciousness of his life.

By the way, it is common to have children on the left hand and Zakuro on the right hand.However, it is said to be the fruit which pays the evil called’ Kissho fruit.’.Then why did you become Zakuro?Actually, when the scriptures were introduced from India to China, they didn’t know what kind of fruit they were, so they replaced Zakuro, the symbol of “harvest and treasure.”.Therefore, in the temples where Ogoko is enshrined in Japan, there is often a lot of trees planted by Zakuro.

At Kishimojin-do, we deal with various amulets and Goshuke.In addition to the white and vermilion, there are also some kinds of Amulets which are put in the paulownia box.

You can also get a Goshuke.The “Oni” written in the Goshuinshi is the one without the above points, and the formal Kishimojin-do notation is the same as the one in the title.This hall can also be called as a head of the Nichiren sect.If you’re interested, why don’t you try both?

In addition, you can pray for praying to pray for childbirth in this hall.There are 1 sets of prayers, and you need to make a reservation in advance.Also, if you bring a belly band, you can pray together, so please bring it with you.As a precaution, I am doing a accept at any time not only on the day of the dog, but I recommend you make an early reservation because it is crowded on Saturday and Sunday.

The next introduction is the “hand-wound City.”.It is held at the Kishimojin-do and the Otori Shrine in Meguro ward at the same time, 1 degrees per month.In the Kanto region, it is a famous handmade city, and many merchants gather every each time, and it is crowded with many customers.

There are about 150 shops in Kishimojin-do alone, so it’s interesting to see a lot of restaurants, because they have a wide range of genres, including food, miscellaneous goods, and furniture.As the author is in principle the owner of the store, he is able to buy the product while communicating with the author who actually created the work.

It is a good place for the city to enjoy shopping with ease as it can be met directly.Other than that, there are workshops such as erasers, so why don’t you try to join your children’s friends with your children’s kids and friends?

In addition, some people would like to open a store in the future.You can download the application form from the official web site, and you can send it to the city in the next month by sending it or bringing it to the city on the day after you fill out the necessary items.

For the schedule, please refer to the official website because it varies depending on the temple’s convenience, as it is based on the third Sunday.Please be aware that the Otori Shrine is only held for Tori No ichi for November, so it will be held only at the Kishimojin-do.

Next, I’ll introduce you to “Onosuke Dango.”.It is a dumpling sold at Daikokudo, located in the precincts of Kishimojin-do.It’s not that you can eat it every day, but it is only sold on weekends and on the day of the sun.The origin of the name is said to have been named after the wish for prosperity of the child, based on the fact that there were 1,000 children who were enshrined in the shrine.

During the Edo period, it was loved as a rest and a souvenir for visitors to visit.However, it was said that 1 degrees disappeared with the times.Later, the company was revived by the president of Hanbidango Co., Ltd., a long-established dango shop, in response to the desire to restore dango.

At Daikokuya, you can taste a set of raw soy sauce grilled dumplings and sweet bean paste dumplings (540 yen).In the store, Daikoku-sama, the name of the restaurant, is enshrined, and you can shake a hammer.Why don’t you try the famous dango that appears in the works of Soseki Natsume, Shiki Masaoka and Ryotaro Shiba?

The oldest candy shop in Japan

Kamikawaguchi
Next is the “Kamikawaguchi Restaurant.”.This restaurant is a candy shop located in the precincts of Ogago no Michi.Its history is old, and it became the oldest candy shop in Japan since the Edo period.The “Kamikawaguchi shop” next to the trees in Ginkgo Trees that is more than 700 years old right away from the temple is the “store.”.

The company is now back to 238 years ago, and the current owner is the thirteenth.It is the store of the real living witnesses of the history that existed before the “Tenmei Famine,” which appeared in the textbook.I heard that the candy was sold at the time of the establishment, but now it has become an extremely popular shop, not a candy shop, but it is a very popular restaurant.

I think there may be some people who have seen this.Actually, I heard it became a model of a candy shop in Studio Ghibli movie.

There are various kinds of candy in the store, and it is sure that adults and children will be excited just by looking at it.Because it is a traditional candy shop, there is no price tag on the product.Of course, the account is calculated by hand, and the owner calculates it by the owner.

Now it’s time to buy sweets easily at convenience stores and supermarkets.However, I think there is a precious experience that can only be enjoyed by a candy shop where you can do a humane conversation.Why don’t you visit them for nostalgia and freshness?

The statue of the guardian deity :

The following is the “Statue of the guardian deity of the ogre.”.It is a stone statue that is hidden quietly in the temple precinct.The figure of the stone statue is the figure after the change, giving a soothing sensation to the visitors who come with a soft expression.The flowers offered by the surrounding people add color to the image.

The next introduction is’ Takeyoshi Inari-do.’.It is Inari-jinja Shrine located in the precincts of Kishimojin-do.It is the god of land enshrined before the Kishimojin-do, the main hall, was built.It is said that this land was once called’ Inari no Mori’ because of this land deity.Today, it is located on the left side of the main hall, and the shrine with the common torii is the shrine where the eyes attract attention.

The enshrined deity is Tamanotama no mikoto.The good fortune is the harvest and prosperity of the five cereals, and it has been collecting the faith of the people of the region from long ago.It is also a popular spot as a power spot for gold luck even now.

Next, I’ll introduce the children’s gingko nuts.This ginkgo tree in the precinct is a tree that has over 700 years of age and is designated as a natural monument of the Tokyo Metropolitan Government.The height of the tree is about 33 meters, and the circumference of the trunk is about 11 meters. It is the largest gingko nut in Tokyo.

You can enjoy the view of the beautiful scenery, as well as the autumn leaves, in addition to the good luck.Why don’t you visit it once?

The festival is commonly known as’ Kitashin Myoken Daibosatsu’ and commonly known as’ Myoken.’.When you look at the sky, there is a star called the Star Star, which doesn’t move from the same position throughout the north sky throughout the 1 years.The “Hokushin Myoken Daibosatsu” is the one that deified the stars.The statue of Gosonzo is a statue of a woman riding on a turtle, and it is said to be a good luck, and it is said to be a good luck for the life of the sea as well as for the longevity of the life of the deceased. It is said to have recovered from the eye disease.

How was it?In this article, I summarized the Kishimojin-do that not only gave children a child’s blessing, but also had good luck in babysitting.It is a place where you can enjoy a relaxing time that is far from the urban noise in Tokyo and the city.It is also a place where couples and families can enjoy a long time ago, such as a nostalgic candy shop or a monthly handmade city.

It is a place where you can keep watching the process of raising children from the place where children are given.Why don’t you come all the way?