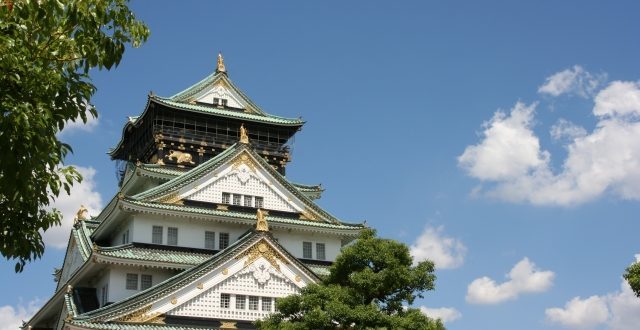 How to enjoy Osaka castle

This time I will introduce the history of Osaka Castle, basic information and the must-see spots that I would like to see.If you are planning to visit Osaka, please try to go out after preparing this article.

The history of Osaka-jo Castle

It was the beginning of Osaka-jo Castle that Hideyoshi TOYOTOMI, who achieved the unification of the whole country at that time, started building at the site of Ishiyama Hongan-ji Temple in 1583 following the Honnoji Incident that Nobunaga ODA was killed by Nobunaga ODA.It is said that the Tenshu of Hideyoshi’s Tenka (the whole country) was not yet a stone, so it was said that the castle was built quickly in order to reveal its dignity, and Tenshu was completed in 1585.After completion of Tenshu, it was said that the castle building was continued, and it was finally extended to about 4 times the current Osaka-jo Park.

After the Battle of Sekigahara and Osaka Natsu no Jin (Siege of Osaka), however, it became the object of the Tokugawa family, but the remnants of the Toyotomi clan were buried deep underground during the reconstruction, so most of the remains of the Toyotomi era were hardly seen.However, the rebuilt second generation Osaka-jo Castle was burned by lightning in 1665, and it was the castle without Tenshu for 266 years until it was rebuilt after that.

The current Osaka-jo castle reconstructed in 1931 is considered to be modeled as a model of Hideyoshi’s castle during the period of Hideyoshi’s era, and it is interesting to see that the moat and the stone wall are the objects of the Tokugawa era, and that the Tenshu is a bit complicated with the object of the Toyotomi era.

The structure of the castle is roughly divided into 4 structures, but Osaka-jo Castle has a structure called an independent Tenshu where the Tenshu is not attached to other buildings.The building technology that was used in 1931 was the reinforced steel concrete building, which was the highest technology in those days.

There are some opinions that it is not a castle, unless it is an existing Tenshu or a wooden restoration tower, but it is highly evaluated as a modern building, and it is registered as a tangible cultural property of the country.

Access Information for Osaka-jo Castle [Parking lots and nearby stations 】

[In the case of using a train]

If you go by train to Osaka-jo Castle, there are some nearby stations, but it takes about 20 minutes to get there by foot from the station.

I have introduced the information that is the basis of Osaka Castle so far, but I will introduce you to the spots that I would definitely like to see when I visit Osaka-jo Castle.The Osaka-jo castle has an overwhelming presence in the stone walls, moats and tenshu compared to other spots, so it tends to be forgotten, but in order to make Osaka castle tourism a better thing, please stop by all the spots.

In the midst of the lively Osaka-jo park, there is a “Castle Chu-yaki burial mound,” in which there are few streets and a little dim place.During the Meiji Restoration, the old Shogunate army handed over Osaka-jo Castle to the new government army, but many of the former Shogunate forces were not willing to do so, and it was said that the castle was burnt by fire and killed by the surrender of the former shogunate.This is a burial mound built by a volunteer of the Satsuma Choshu clan, the main branch of the new government army that praised the behavior as a guide to the samurai.

Now, it is very lively as a gorgeous tourist spot, but I cannot help but hope that it was difficult at that time.

In fact, the pine of Rennyo Shonin Kesa is not left as a tree, but it refers to the root in a hut built near a stone monument.If it is called Matsu, it tends to look for trees, but please be aware that the object you are looking for is below.Considering the later Ishiyama Hongan-ji Temple, I feel grateful that there are still some things related to Hongan-ji Temple.

The famous power spot “Toyokuni Koku-jinja Shrine” is also known in Osaka Castle.The enshrined deity is Hideyoshi TOYOTOMI, and after the success of the success of the success of the peasants from the peasant to the ruler of the country, it is popular that they can benefit from business luck and promotion luck.The shrine is very small, but its dignified main building has a sense of intimidation.If you have trouble with your current work or want to get promoted, why don’t you visit this 1 degrees and try to make a good fortune?

The “Mizubori and Ishigaki” is the place where you can feel the presence of the Tenshu in Osaka-jo Castle.This moat and stone wall are not the objects of the Toyotomi era, but they are the remnants of the Tokugawa period, but they will be surprised by the moats and the high stone walls that are not seen in other castles.It is said that when Hidetada TOKUGAWA, the second shogun of Edo bakufu ordered the construction, there was an instruction to increase it 2 times more than the object of the Toyotomi era.This seems to be because the influence of the Toyotomi clan is wiped out and the power of the Tokugawa Shogunate is known to the world.

Looking at this historical background, there may be a strange discovery again.

This is an “Otemon” that has been designated as an important cultural property of the country and still retains the appearance of those days.At Osaka Castle, which was damaged by fire, lightning strike and air raids, the disaster was avoided many times.This is a gate that was built in 1628 years ago, and I can’t hide the surprise when thinking about it as something that was about 400 years ago.

The gate is a gate in the form of a Monmon gate with 2 pillars supporting the gate and a roof on top of it.It has been damaged because it has been corroded, but special techniques that seem to be impossible at first sight are adopted.It is said that the technique is used in Japan only here, so look at the fitting on the front right side of the main right side when you look at the Ote-mon gate of Osaka-jo Castle.

Large stones of Osaka Castle and Sakuramon, and Octopus Stone

If you visit Osaka-jo Castle, you will definitely see it, and the size of its size is surprising “Sakuramon stones and octopus stones.”.There are many castles across Japan, but there are no places other than Osaka-jo Castle where many huge stones can be seen at 1 degrees.

The largest boulder in Osaka castle is considered to be named because it has a blotch like octopus, and it is estimated that it is about 36 tatami mats and weighs about 130 tons.There is also a third volume of Furisode stone beside the octopus stone, and this is estimated to be about 120 tons.This area is full of big stones, so it is overwhelmed by its size.

In front of the octopus stone, tourists often take pictures, so how about 1?

The first reconstruction in Japan was the Tenshu of Osaka-jo Castle, the first reconstruction.The remains in Osaka Castle are almost the same as those of the Tokugawa period, but it is said that only the model of Tenshu reproduced the castle in the era of Toyotomi.If the object of the Toyotomi era is completely reproduced, all of the outer walls are supposed to be black, but it is characteristic that the white plaster walls, which are reminiscent of the Tokugawa period, and the fifth layer, which are made of black lacquer, are made of black lacquer, and only the fourth layer is made of black lacquer.The castle is a history museum, displaying materials about the age of the Toyotomi era and materials related to Osaka Natsu No Jin (Summer siege of Osaka).

Let’s look at the observation deck on the top floor if you look at the exhibition items in the castle.The observation deck is about 50 meters above the ground, and you can see the streets of Osaka by 360 degrees.There is a large building around the area, but it doesn’t seem to obstruct the visibility, so you can look at a pleasant view.

There is a wire wire to prevent the fall, but the middle is empty, so you can take photos.The view floor is especially popular and is crowded with many people, so let’s enjoy the scenery that Hideyoshi and Hideyoshi have already seen in order to avoid the obstacles of others.

It was supposed to be a part of a stone wall in Osaka-jo Castle, but it was “bad stone” that could not be a stone wall for any reason.In Osaka-jo Castle, such poor stones are exhibited quietly.I may feel that it is an obstruction when I look at it without the knowledge, but I feel like I love it if I think that it was originally the stone stone.

There is a pattern that indicates the origin of a daimyo’s crest and a stone, so it should be interesting for a stone or a history enthusiast.There is a “carved stone square” in the north area, so if you have time, please go around there.

It is an inscription of the “Mountains of the mountains and rocks,” the scars of the war are engraved clearly.After the Meiji Restoration, there was a time when Osaka castle became a military factory to produce weapons and produce weapons.It is a war that killed many victims in Nagasaki and Hiroshima, but there is a war spreading in Osaka, and it is possible to see the bullet marks that are believed to be attached to the stone walls of Osaka-jo Castle by shooting guns.

It is located quietly in the area where people seldom visit, but looking at the stone walls in this area, you will see the horrors of war.

The person who appeared in the NHK Taiga Drama in 2016 was also in this Monument to the faithful who died in battle, so it is an important place for those who like the Taiga drama. I was introduced to Osaka Castle, a popular sightseeing spot in Osaka. How did you like it?As Osaka Castle is always crowded with tourists, it has a strong image, but if you look closely at one of the 1 spots, the sad stories are also sleeping.However, it is also a great flavor that goes around a historical spot.The stone walls, moats and Tenshu are very impressive, but you will get excited about the spots that are scattered around each place, so you can enjoy sightseeing around Osaka Castle.