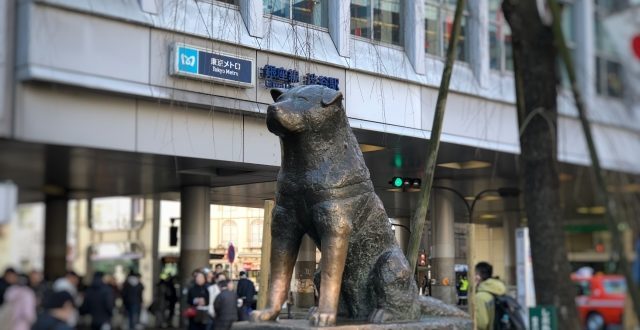 How to get to the statue of Shibuya Hachiko

2019年2月27日 Tokyo Travel Comments Off on How to get to the statue of Shibuya Hachiko 1,659 Views

Shibuya Hachiko statue is also a symbol of Shibuya station, and it is a standard spot to meet.When you go to Shibuya for the first time, you often designate a meeting place in front of Hachiko, but there are many exits at Shibuya Station, so you have to understand how to get there from the right exit and exit from the exit exit.

In this article, we will introduce how to access the Statue of Shibuya Hachiko, the history and charm of Hachiko statue, and the recommended spot for visiting Shibuya, other than the statue of Hachiko.

Hachiko statue in Shibuya is a standard meeting spot of Shibuya station.There are many tourist attractions such as scramble intersection, Shibuya 109, and so on, and it is a place that is suitable for the starting point of Shibuya sightseeing.

At JR Shibuya Station, there are 5 gates, so please check the Hachiko gate while checking the guide board so that you don’t get out of the wrong ticket gate.

Even if you meet in the statue of Hachiko, it is difficult to secure the area in front of you, so if you come to the area nearby, you can contact the person who meets you and drop down.It’s the best way to contact you by phone, because you may be late for communication such as SNS.

Attractiveness of Hachiko Statue and Model

Hachiko, a model of the statue of Hachiko, was a real Akita prefecture, where the owner waited for 10 years before the owner returned to Shibuya Station, and the statue was taken up by the newspaper, which resulted in the construction of a bronze statue.

During World War II, Hachiko was destroyed because of material supply, but it was rebuilt after the war, and it still became a place to meet in front of Shibuya Station as a symbol of Shibuya.

For this reason, people who meet in Shibuya use the image of Hachiko, not the statue of Hachiko, as a meeting place, and try to meet as smoothly as possible.Let’s take a look at it.

Shibuya Station police station is a police station on your right after you exit the Hachiko ticket gate at Shibuya station.There are large police boxes and prominent electronic bulletin boards, so they are often used for meeting among women.

Starbucks Shiseido Tsutaya Store is a popular seller of Starbucks stores in Starbucks, the world’s largest retail store.It is located on the second floor of the Q-Front building facing Shibuya Scramble Intersection, and it is used as a meeting place where you can’t get lost with a conspicuous signboard.

Compared to Hachiko front, the number of people is relatively small, so you can wait smoothly.

Shibuya Hachiko statue is a standard place to meet in Shibuya, and many people use it to meet each day.If you make a mistake in the exit, it will take a long time until you reach the statue of Hachiko, so let’s know the correct exit in advance.