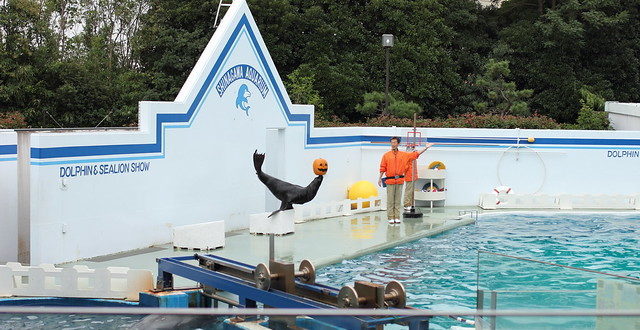 How to enjoy Shinagawa Aquarium

The “Tunnel Aquarium” where you can enjoy a romantic and romantic atmosphere, the exhibition of fantastic jellyfish, the dolphin and sea lion show, and other events, as well as the “Shinagawa Aquarium” where you can find a lot of attention, are very recommended spots for dating on your dates.We’ll introduce you to the attraction of “Shinagawa Aquarium” and the highlights of the exhibition!

“Shinagawa Aquarium” is located in a comprehensive park called “Shinagawa Citizens’ Park” that is located close to the sea, a 8 minute walk from Omorikaigan Station.The aquarium is an aquarium where you can watch the sea and river living in the theme of “Interacting with the Sea and the River” and learn about the aquarium.

I’ll introduce you to the basic information about the basics of the Shinagawa Aquarium, which children and adults from such children can enjoy.Please use it as a reference to go out.

The history of “Shinagawa Aquarium”

“Shinagawa Aquarium” is an aquarium opened in 1991 under the theme of “Contact between the Sea and the River.”.This aquarium is a public private facility established by Shinagawa Ward, and is operated by Sunshine Enterprise Co., Ltd. since its opening.

In 1992, it was opened in just 6 months, and it surpassed 1,000,000 visitors.In the film “GODZILLA VS. DESTOROYAH” released in 1995, a large-scale filming took place in the building and became a topic of conversation.

Every 5 years we have renewed the memorial, and in August 1996 we opened the “Penguin Land” and the “Shark Exhibition Tank” in 2001, and in 2006, the “Seal Museum” adjacent to the main building was opened.

In July 2008, “Jellyfish Zone” opened, displaying more than 200 jellyfish with 4 kinds of jellyfish (Aurelia aurita, Spotted jelly, color Jellyfish, lily jellyfish), and the aquarium is particularly popular in the aquarium.

There are three ways to access the Shinagawa Aquarium, as shown below, but the recommended way is to use a free shuttle bus from Daejeong Station on the JR Keihin-Tohoku line.
There is a parking lot, but there is a lot of parking available, so please be aware that the full number of parking lots will become full soon.

In Shinagawa Ward, Tokyo, there is another aquarium called Aqua Park Shinagawa, which is other than “Shinagawa Aquarium.”.

“Shinagawa Aquarium” is the “Aquariums near the sea” in the Shiokaze Kagaru Park. Does it look like “An Aquarium with an Urban Atmosphere” in Shinagawa Prince Hotel located at the front of the Takanawa exit of Shinagawa Station, “Aqua Park Shinagawa”?

This 2 aquariums are interesting as they have different types of exhibits.The Shinagawa Aquarium is a common type of aquariums, which can be enjoyed from children to elderly people such as fish and jellyfish exhibits, underwater tunnels, dolphin and lion shows, and so on.

“Aqua Park Shinagawa” is an aquarium where you can see the attraction of the exhibits, especially the aquariums with particular attention to the appearance of light. The exhibition of jellyfish is especially beautiful.Although the size of the fish is small, you can enjoy merry-go-round and pirate ships at an extra price, and you can enjoy a powerful amusement that doesn’t seem to be an aquarium in the hotel.

The Aqua Park Shinagawa fare is set at 2200 yen for high school students and more than the Shinagawa Aquarium.The business hours are from 10:00 to 21:00.

Both the “Shinagawa Aquarium” and the “Aqua Park Shinagawa are attractive, so you may decide which one you want to go to, but depending on how you want to go there, you should consider it.”.

The charm of “Shinagawa Aquarium” and the highlights

In the basement floor, the “underwater floor” has a “tunnel aquarium” where you can look up the fish swimming in the aquarium. In a romantic atmosphere, you can enjoy about 900 creatures living in a graceful atmosphere of about 60 kinds of creatures. 1.

At the “Seal Museum”, you can enjoy a 360 degree panorama of seals in a water tank, and at the “Jellyfish Zone” where you can see more than 200 jellyfish, you will surely be healed by jellyfish that swim in a bright and elegant manner!

The entrance fee is reasonable, and the Shinagawa Aquarium is very recommended for those who want to enjoy the aquarium quietly and calmly.I’ll introduce you to the attraction and highlights.

A large water tank with a water volume of 240 tons is divided into 1 and 2 floors, and the first floor can observe the figure of a seal that swims freely in a circular water tank with a diameter of 11 meters.In this circular aquarium there is a viewing space, where you can see how nice the sesame seals swim from anywhere in 360 degrees.

On the surface floor floor of the second floor, you can see the seals are relaxing on the ground.This is the first seal tunnel in Japan!Please look at the cute Spotted Seal from various angles.

In the light of the LED, the beautiful jellyfish, which is fluffy and floating, is a magical “world of jellyfish.”.About 200 jellyfish are swimming elegantly in the 4 water tanks with different shapes.

The jellyfish here include “Aurelia aurita,” “Spotted jelly,” “Color Jellyfish,” and “Urijellyfish.”.In the “World of Jellyfish” where the illumination of the whole corner is lowered and the lighting performance is very attractive, it is possible to learn about the living creatures of jellyfish.

Also, there is a jellyfish photo studio where you can take jellyfish and commemorative photos at this corner, so I recommend you to take a photo with the jellyfish.The magical and beautiful “World of Jellyfish” is a healing world that is irresistible to the jellyfish.

The “Sea Lion Show” held at the Dolphin and Sea Lion Stadium in 1 f is held on weekdays, 1 days on weekdays, and 2 times on weekends, etc. compared to other shows, so if you want to see it, please check the time and go out with the other show at the time of the day, so please check the time for those who want to see the show, since the number of the show is smaller than that of the other show at the time of 1 days and times. 1.

The entertainers and the lions will enjoy a variety of performances, such as deciding on a basketball goal or standing up.You’re sure to be moved by the dexterous performance of a ball or a hula hoop!

The lions in the show have a variety of unique characters, ranging from veteran lions to new ones.The show of the sea lions is comical and lovely, and you will smile as if you were looking at it.Please look at the perfect performance of the lion’s performance.

Where you can enjoy?

The seal show held at the seal museum 2 f is held only 2 times a day on weekdays and on weekends only 1 days.

The seal show is different from other shows in that it doesn’t have a guest seat, so the show is held at the land part of the sea floor of the seal, and it is a style to watch it.

At the seal show, the show will be held after learning about the characteristics and ecology of the seals.It is very cute to hear a seal, shake your hands, or sing a song.You must be surprised by the talent.Please take a look at the light talk of the keeper’s staff and enjoy the seal show, and those who like seals.

The Underwater Show held near the tunnel water outlet at the bottom of the basement floor of the underground floor 1 f is held 3 times a day on weekdays, and 4 times on weekends, 1 days, and times. 1.(Golden Week)

In the staff of the museum, divers feed fish and communicate with fish and introduce fish in the aquarium.

The scene in which divers feed directly to large fish such as spotted eagle ray must be a must-see!Please also pay attention to how to eat fish and so on.

This is the most popular “dolphin show” ever since the opening of the “Shinagawa Aquarium”!It is a very popular show, so it is held 3 times a day on weekdays, and 5 times in 1 days during Golden Week and so on in 1 days.

At the beginning of the show, when you hear about the dolphin’s body and ecology, the show will start!Dynamic jumps, show using rings and balls, and so on, and you can watch the powerful performance of dolphins.

After the show is over, you can take a photo of a photo with a dolphin.If you wait in front of the water tank, the dolphins will swim, so if you cut the shutter with the timing, you’ll be able to take a nice photo with the dolphins.

“Back watch” where you can learn about the back of the aquarium.

The staff of the staff of the building can visit the facilities and filtration systems behind the aquarium, the machine room, the feeding facility, and the water storage channels.If you are older than 3 years of elementary school students, you can participate, so please apply at the entrance reception as soon as possible if you want to participate.

In the “Umi no Jewelry Box” in the building, you can observe the eating scenes of fish.The staff explains the fish eating the fish.

In a “Sea Jewelry Box” swimming with more than 30 kinds of tropical fish, you can see the rice time of tropical fish that you can’t see normally.It is very powerful and shocking to see the beautiful fish swimming elegantly in the dining time when the eating is fierce and the bait is taken away.

It is an opportunity to observe the fish which are usually hidden in coral and rocks, and the fish that can hardly be seen, and the fish that don’t move normally, because they show a different appearance from the usual ones during the time of the rice time.

I have introduced you to the attractions and highlights of “Shinagawa Aquarium.” How did you like this?

The “Shinagawa Aquarium” is a traditional aquarium where you can enjoy kids and adults. It is perfect for dating dates, such as a romantic tunnel aquarium, a jellyfish exhibition, cute and cute dolphin and lion show, etc.It is a healing spot that you’d love to stop by when you go to Shinagawa.