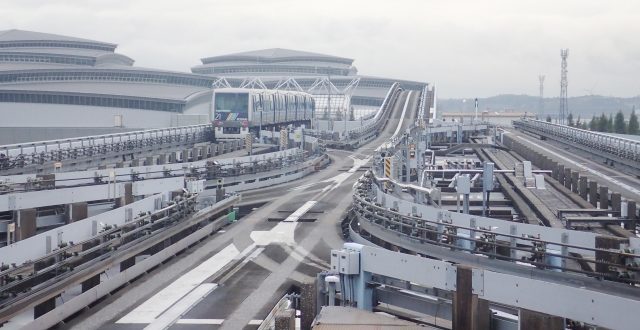 [Save] Convenient for travel at Toyosu!Yurikamome, train (Yurakucho Line) and bus information list

2019年6月25日 Tokyo Travel Comments Off on [Save] Convenient for travel at Toyosu!Yurikamome, train (Yurakucho Line) and bus information list 815 Views

Toyosu is located in a convenient location where you can go wherever you go, such as the city center, Odaiba and Chiba area, but you can easily travel by understanding basic information about Yurakucho Line, Yurikamome, and bus buses.

Travel from Toyosu to Toyosu is now safe!If you have a plan to move in Toyosu, please save this and make sure you can see it immediately in case of emergency.

Basic information about Yurikamome in Toyosu

Yurikamome is the official name “Yurikamome Tokyo Waterfront New Transit Waterfront Line” and it is a monorail that can travel from Toyosu through Odaiba to Shinbashi in Minato Ward.

It takes about 30 minutes from Shinbashi to Toyosu, and is recommended if you want to enjoy the scenery outside rather than transfer at Yuraku-cho.

Also, the Yurikamome is easy to access by using Yurikamome in the area where access is difficult to access, and when events such as Comket are held in the Odaiba area, the road from Yurakucho Line to Yurikamome is very crowded, making it a very popular route.

Yurikamome Toyosu Station is located at the last station of the line.The first train starts at about 5:15 minutes, the last train is at 0:30 am, and the m is operated at intervals of 5 to 10 minutes.There are 2 routes, and the departure time is different even if you arrive at the same time, so let’s try to get on the train that departs next.

If you need a more detailed timetable, look at Jordan !

There are various kinds of cafes around Toyosu, but it is important to go to a cafe close to Yurikamome Toyosu Station if you want to stop by the time you ride the Yurikamome.

The recommended cafe is “Peru Me E L” and “McDonald’s Toyosu Ekimae”.

“Pel Me e E L” is a bay cafe where you can eat freshly-baked bread, so it is recommended that it is not less than 1 minutes away from Yurikamome Toyosu Station.Also, the “McDonald’s Toyosu Station Store” is located close to the intersection, and it is recommended that it is at a reasonable price, so that it is an affordable price.There are charging and free Wi-Fi, so if you need to open a personal computer, you may be able to do so.

Yurikamome Toyosu Station has a slightly extended route over the line, but this is a remnant of the extension plan to Harumi and Kachidoki.It seems that there was a plan to extend the plan further to Tokyo Station, Yurakucho Station and Shinbashi Station, but these were broken down.Will the plan be resumed someday?

The Yurakucho line Toyosu Station is a train used by many people who go to and from Toyosu.It is a route that you can reach Toyosu by passing through Iida, Ichigaya and Yuraku-cho from Wako-shi, Saitama and going to Shinkiba.You can change to JR from Yurakucho, or you can go to Shinjuku by Ichigaya.

The station developed along with the redevelopment of the town, and it was renovated in 2014, and it became very beautiful.There are so many exits, so it’s a detour to choose the exit that you want to go to.

If you go to monorail Toyosu Station, I recommend exit number 7 or 6 b.Urban Dock LaLaport Toyosu, the most popular spot in Toyosu, is the most convenient way to exit 2.

The trains that come to Toyosu Station on Yurakucho Line are operated at about 5:05 a.m., and the last train is at around 0:14 at night, and each train is operated at intervals of 3 to 15 minutes.It takes a little time to get off at the ticket gate when you get on the train of Toyosu, so it’s good to arrive at the station with plenty of time.

If you want to look up a more detailed timetable, check out Jordan !

There are 10 exits in Toyosu Station on the Yurakucho Line, and it takes about 5 minutes by walking from the farthest exit, so it’s important to choose the exit that was at your destination.Below is the location of the exit.

Trains in Toyosu Station are especially crowded during the morning hours, especially around the first company, which is the most convenient for transferring trains in Yuraku-cho and Nagatacho.

If you are going to Toyosu Station from Shinjuku, I recommend you to get there via Ichigaya.You can go to Ichigaya Station by Chuo Line and Sobu Line from Shinjuku and transfer to Yurakucho Line.It is difficult to change trains at the city of Ichigaya, but this method is the easiest way to get there.

Also, if you go to Toyosu Station from Tokyo Station, there is a way to go there via Ichigaya like the same way as above, or if the Keiyo line rapid train goes through the right time, you can go to Shinkiba and return to Toyosu from Shinkiba.

Let’s find the best way to meet the congestion and the time to ride.

If you go to Haneda Airport by train from Toyosu Station, you can go to Yurakucho by Yurakucho Line, transfer to JR, and go to Hamamatsu-cho Station from there to Tokyo Monorail. It’s the best cost performance.

If you want to enjoy the scenery outside the Yurikamome, you can go to the International Exhibition Center at Yurikamome, transfer to the Rinkai Line and go to Tennozu Isle and go to Haneda Airport from there by Tokyo Monorail.

Let’s use it according to the situation you are using.

Basic information about buses at Toyosu

There are 12 stations at Toyosu station in Toyosu.Each system number and destination are as follows.

How to get to Haneda Airport by bus from Toyosu

There is a limousine bus service between Toyosu and Haneda airport, and it costs 720 yen for adults and 360 yen for children, so you can go to Haneda Airport at a very reasonable price.

The location is located at the bus terminal of Toyosu, and it takes about 20 minutes by Haneda Airport Terminal 2, and it takes about 35 minutes to the international terminal.The first train starts at 3:50 and the last stop is at 20:15 until the end of the last 1 hours.

Toyosu has 3 main means of transportation, Yurikamome, Tokyo Metro and bus, and you can freely go to and from Toyosu from Toyosu by making effective use of each.Let’s take advantage of congestion information, transfer information, bus buses and so on, so that we can move freely from Toyosu as a starting point.